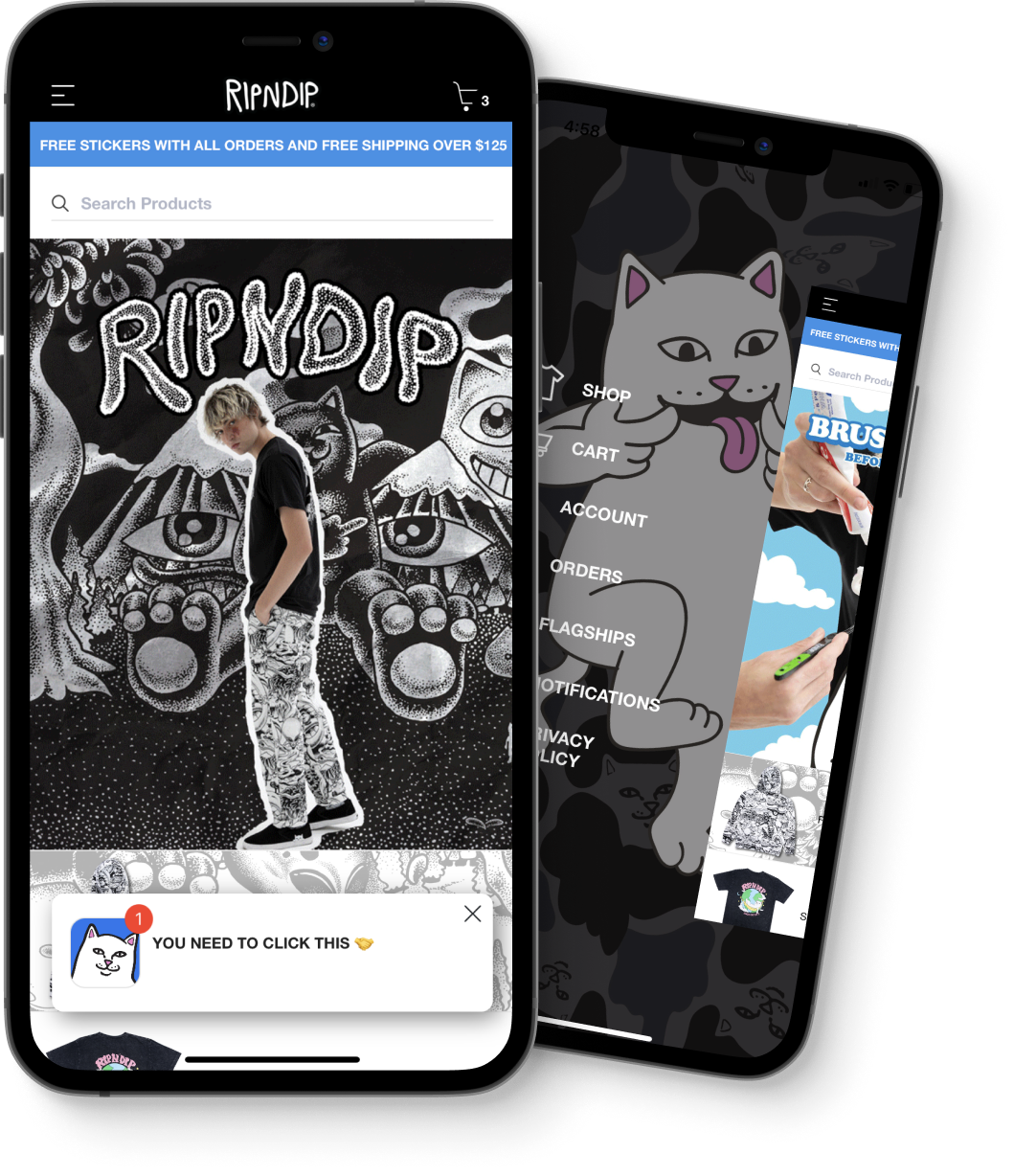 Scan the QR code to download the
RipNDip
app

Flipping the bird to success

Fashion company RipNDip is the brainchild of skateboarder Ryan O’Connor that started in Orlando, Florida in 2009. But you probably know it from their infamous “Lord Nermal” tee that kickstarted their rapid growth. (Hint: It’s the t-shirt with a cat in the pocket flipping you off.)

Now based out of LA, RipNDip is a popular streetwear fashion brand that doesn’t take itself too seriously—perfect for their young, hypebeast customer base.

When growth is easy, what comes next?

Growth has always been pretty organic for RipNDip. Skateboarders saw the tees in LA and wanted their own. Lord Nermal made the first page of Reddit. Fun posts naturally grew their Instagram. In addition to the flagship store on Fairfax, dubbed as one the coolest street in LA, they have opened brick and mortars in Tokyo, Mexico City and New York. After years of success, they were looking for the next step to scale their business—and tossed around the idea of an app.

First, they had some questions: Should they build their own app? Is it where they want to put their energy right now? How can they make it not expensive and time-consuming?

They thought about it (and saw some competitors creating their own) and knew they needed an app. Director of eCommerce, Matt Pierce, saw an opportunity to reach mobile shoppers better.

Push notifications for the win

For RipNDip, Tapcart was the clear choice for mobile growth. The RipNDip team saw Tapcart as an opportunity to reach their customers directly, using what they’re known for best: content and humor. Their customers would much rather see a promotion than read about it. That’s why Tapcart’s push notifications features like animated GIFs were a big draw, especially over cumbersome and spammy SMS. The team branded their promotions, made the notifications look clean and cool, and drive traffic directly to their products. They always insert their brand voice too, which makes the push notifications stand out when it lands on the shoppers’ home screen.

A question that pops up for many brands: Will a mobile app cannibalize mobile web shoppers? But RipNDip had faith.

Just two months after going live with RipNDip’s app, their total sales increased by 53.2%—and increased another 43% the next month. App users have proven they’re more die-hard fans, with higher conversion rates, revenue per session, and lifetime value than mobile and desktop web.

It hasn’t taken much promotion on their end to see these results. Some creative examples of how they got app downloads? App exclusives like offering free wallpapers to fans who downloaded the app. Just a simple announcement on Instagram encouraged downloads. It was a huge success.

Their mobile app is now one of their best sales channels—second only to their website.

Want to follow this streetwear brand on their mobile app journey? Check out RipNDip in the App Store today. You can't miss them with their stellar 5-star reviews.